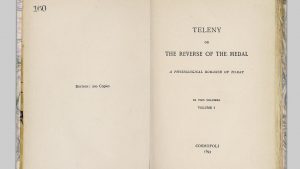 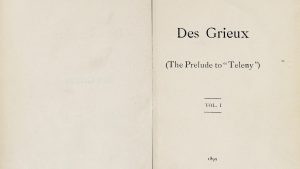 Teleny (1893) was produced and circulated in a clandestine manner in fin-de-siècle London. It is reputed to be the first homoerotic novel in English, and its authorship remains disputed. It is extremely rare, and of an initial print run of 200 there are only seven remaining copies. Des Grieux (1899) is a prologue or prequel to Teleny, although it was published later. There are only three known copies of this novel, including the UBC copy. It has never been reprinted, and so very little is known about this text because it has, until recently, been inaccessible to researchers. What makes the scarcity of these books even more intriguing is the legend that Oscar Wilde may have been somehow involved in writing Teleny. Notwithstanding this attribution, however, Teleny is more likely the result of collaborative authorship among a tightly-knit coterie of queer men (some of whom may have known Wilde) in Late-Victorian London.

Posted in Feature | Tagged with acquisitions and discoveries, English

Comments are closed, but trackbacks and pingbacks are open.